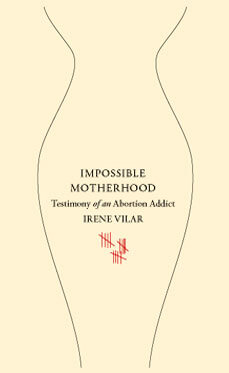 The cover of book Impossible Motherhood is simple but alluring. It traces the outline of a woman with two lines, with the title and sub-title ‘Testimony of an Abortion Addict’ located where the pubic mons is. Then, there are three sets of red lines (each set has four lines with a fifth line diagonally striking them off to symbolise ‘five’) at where the figure’s vulva would be.

I was immediately intrigued. An alcoholic, substance abuser, and sex addict, I have heard of these. ‘Abortion addict’ is a first. The cover image depicted her vulva, graphically, as shut down. I opened the cover to read the forward by Robin Morgan: “Irene Vilar was just a pliant young college undergraduate in thrall to her professor when they embarked on a relationship that led to marriage—a union of impossible odds—and fifteen abortions in fifteen years.” I gasped. Fifteen!

I had to read on. Born in Arecibo, Puerto Rico, Irene Vilar is a literary agent and series editor of The Americas at Texas Tech University Press; she lives in Colorado with her husband and two daughters. Her first memoir, The Ladies’ Gallery, was a Philadelphia Inquirer and Detroit Free Press notable book of the year and was short-listed for the 1999 Mind Book of the Year Award.

The book is really about a young woman who never received the love she always wanted. At eight, Vilar watched her mother commit suicide by leaping out of a car. At twelve, she read The Diary of Anne Frank and identified with the girl who lived in an attic and had to ask permission “to exist in that smallest of holes”. At seventeen, she began a sexual relationship with her fifty-one year old college professor that lasted eleven years.

Readers are in for quite a ride as Vilar lets us in on the truth about everything, even when there is no truth to be had. How did she allow herself to become pregnant again and again? What made her marry the domineering man who insisted on freedom by her remaining childless? As the book went on, we lose track of the number of abortions and the details of how each abortion took place, almost as if Vilar’s life as spiralling out of control and she no longer could recall. Did the details matter? The person does. I found myself silently rooting for her to make it. Beautifully written, Vilar unveils to us her life—one that has been more painful than the abortions she had borne, one which is distressing at times, compelling throughout yet ultimately inspiring.

I found these reviews on Amazon. ‘E. Bentz’ commented, “I was not let down by this book – I am pro-life, but this book offered a new perspective that gave me more understanding on what a woman can go through when dealing with the hard decision of abortion.”

‘Poetry Lover’ recommended the book: “This is a book that everyone should read – precisely because we can probably all agree that abortions are terrible things. Irene Vilar says nothing but that, but without the reductive politics of the usual debate. Hers is a complicated, wrenching story about gender, nation, privilege and marginalization, the politics of health care and culture. I’m very much pro-choice but that’s not what this is about – it’s a journey, a painful, scary journey, deftly written, that will make you reconsider everything.”

‘G. A. Bixler’ wrote, “If you have the least feeling for women’s issues in the United States and other countries, you owe it to yourself to read this book. It is not fiction; it is a reality that must be explored and discussed…YOU must discover this for yourself!”

I agree with ‘Bentz’ and ‘Poetry Lover’ that Impossible Motherhood furthers one’s understanding of abortion. This is not an easy topic to discuss and having had this glimpse into the life of a woman who had serial abortions, we can only conclude that abortion is a personal and much more difficult issue to fathom publicly. ‘Bixler’ is also right in that there is much value in Vilar’s book in exploring, discussing and understanding attitudes towards sex and abortion.

Read more about the book here.