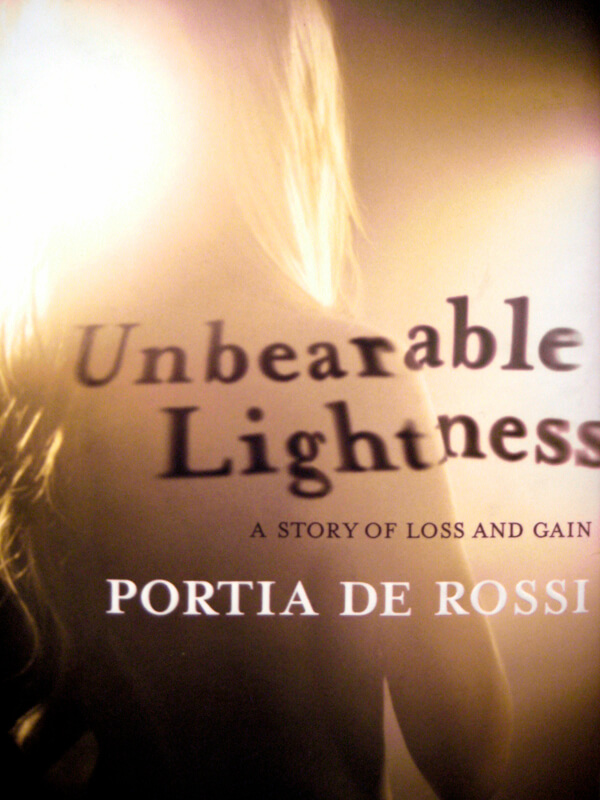 I had enjoyed watching ice-cold Nelle Porter in the television series Ally McBeal. This character was played by Portia Lee James DeGeneres (born Amanda Lee Rogers; 31 January 1973), known professionally as Portia de Rossi. I thought her extraordinarily beautiful with her shiny blond hair (which she admitted in this book contributed to her career success), seemingly untouchable, and with a zany sense of humour to match.

If my memory serves me right, I had first learned about de Rossi’s battle with anorexia (I did not know she was bulimia as well) when tabloid magazines featured her looking skeletal. I was incredulous that this magnificent woman could believe she was inadequate in any way and would resort to starving herself. Later again through the tabloids around 2004, I found out that she was now partnered with famous (now even more famous) American stand-up comedian, television host and actress, Ellen Lee DeGeneres. The couple got married in 2008 after and celebrated their 4th anniversary in October.

In this 2010 autobiography, Unbearable Lightness: A Story of Loss and Gain, de Rossi begins with a prologue of what goes on in her head each morning as she awakens, “I need to use the restroom, but I can’t get out of bed until I can remember what I ate.” It was interesting to me that the voice in her head is masculine and described as a “drill sergent”, “Since we first met when I was twelve he’s been with me, at me, barking orders.” This drill sergent would stay with her for 20 years.

De Rossi chronicles the war she waged on her body and her fluctuations in weight between 76kg and a nearly-fatal 37. The eating disorders crept up on the pre-pubescent Melbourne model when at 12, she started modelling and saw her taking up exercise, purging and laxatives with a greater passion and almost starving herself to death. I agree with the review by New York Times that this book is “written with artistry, compelling insight, and lucid frankness.” Because it was so eloquently and intelligently written, I began to wonder if she did not hire a ghost writer. She really did not need to – this is a very smart woman who dropped of law school over a more exciting career.

At the end of the book, de Rossi shared, “Just because I’d stopped starving didn’t mean I didn’t still have an eating disorder. My eating disorder felt the same to me. It took up the same space in my head, and driving around the city to find the perfect comfort foods took up as much time as driving around the city to find the tune with the lowest sodium content.” Indeed as a society we focus so much on the external that if it looks alright on the outside, it must be.

The book also addresses de Rossi’s coming to terms with her sexuality. She revealed, “It’s debilitating and a horrible thing to hide who you are. But I love acting and I feared it would be the end of my career. The studios won’t green-light something with a lesbian actress playing a mother of two. There hasn’t been a precedent for famous gay actors playing straight characters. There are many gay actors, but they don’t come out, and that makes it harder for ¬everyone because it tells people you’re ashamed of your sexuality.”

I won’t spoil the book for you except share that I am really happy that de Rossi has shared her story and is now living life fully and vibrantly.

You can find Unbearable Lightness here.

“A stark, well-written portrait of how De Rossi lost control of her life as she became consumed by her struggle for perfection and acceptance.” —Washington Post

“In prose as simply elegant—and as powerful—as a little black dress, De Rossi weaves together three themes—the impact of a loving, but lonely girlhood as the child of a single mother, the corrosive effect of constant doubts about her appearance and the internal struggle over her sexuality.” – —Los Angeles Times (5 star review)

“The blunt, pity-free matter-of-factness with which de Rossi shares secrets and lies about her eating disorders and her sexuality makes this forthright confessional story at once shocking and instructional, especially for younger women who may be secretly suffering on their own.”  — Entertainment Weekly

“De Rossi’s memoir reminds us that fame and celebrity are no substitute for feeling comfortable in one’s own skin.” — Jodi Picoult

Now in paperback, the New York Times bestselling memoir from Portia de Rossi explores the truth of her long battle to overcome anorexia and bulimia—“an unusually fresh and engrossing memoir of both Hollywood and modern womanhood” ( Los Angeles Times, 5 stars).

In this groundbreaking memoir, Portia de Rossi reveals the pain and illness that haunted her for decades, from the time she was a twelve-year-old girl working as a model in Australia, through her early rise to fame as a cast member of the hit television show Ally McBeal . All the while terrified that the truth of her sexuality would be exposed in the tabloids, Portia alternately starved herself and binged, putting her life in danger and concealing from herself and everyone around her the seriousness of her illness.

She describes the elaborate rituals around food that came to dominate hours of every day and explores the pivotal moments of her childhood that set her on the road to illness. She reveals the heartache and fear that accompany a life lived in the closet, a sense of isolation that was only magnified by her unrelenting desire to be ever thinner, ever more in control of her body and the number of calories she consumed and spent.

From her lowest point, Portia began the painful climb back to a life of health and honesty, falling in love and marrying Ellen DeGeneres and emerging as an outspoken and articulate advocate for gay rights and women’s health issues. In this remarkable and landmark book, she has given the world a story that inspires hope and nourishes the spirit.

Portia de Rossi is an Australian-born actress best known for her roles in the popular television series Ally McBeal, Arrested Development, and most recently Better Off Ted. She currently resides is Los Angeles with her wife Ellen DeGeneres. This is her first book.