Book Review: I Am Nujood, Age 10 and Divorced 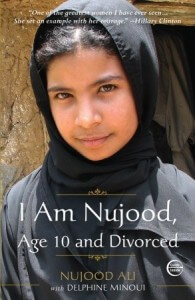 The title is attention grabbing. It is hard to imagine that there have been many younger divorcées — or braver ones — than a pint-size third grader named Nujood Ali.

When I first picked up this book from the children’s section at the library, I thought this was the kid’s version as it was such an easy read – but quickly realised the simplicity of the language did not deter from the complexities of the messages it was trying to communicate.

Written through the eyes of a 10-year-old, this is a deeply disturbing account of what happens happen when women do not have voices. I finished this book in one sitting but found it impossible not to be distressed. It has a happy ending though.

Nujood is one of the 16 children born just outside the remote village of Khardji to her father’s first wife. Nujood has no birth certificate and her mother cannot remember her date of birth. Her nightmare began at age 10 when her family told her that she would be marrying a deliveryman in his 30s.

Her new husband forced her to drop out of school (she was in the second grade) because a married woman shouldn’t be a student. At her wedding, Nujood sat in the corner, her face swollen from crying. She was raped on her wedding night even though the groom had promised that sex would not happen until after puberty. He soon began to beat her as well.

Nujood had heard that judges could grant divorces, so one day she sneaked away, jumped into a taxi and asked to go to the courthouse. With the help of the international press, an activist lawyer and sympathetic judges, Nujood successfully divorced her husband and returns home. The publicity inspired others, including an 8-year-old Saudi girl married to a man in his 50s, to seek annulments and divorces.

For more about Nujood, click here. Purchase this book here.

Forced by her father to marry a man three times her age, young Nujood Ali was sent away from her parents and beloved sisters and made to live with her husband and his family in an isolated village in rural Yemen. There she suffered daily from physical and emotional abuse by her mother-in-law and nightly at the rough hands of her spouse. Flouting his oath to wait to have sexual relations with Nujood until she was no longer a child, he took her virginity on their wedding night. She was only ten years old.

“A powerful new autobiography…It’s hard to imagine that there have been many younger divorcées — or braver ones — than a pint-size third grader named Nujood Ali.” — Nicholas Kristof, New York Times

“Her case has brought international exposure to the archaic practice of robbing girls of their youth.” Four [out of four] Stars — People magazine

“an international icon of tenacity and courage” — New Yorker

“One of the greatest women I have ever seen . . . She set an example with her courage.” — Hillary Clinton

“This book took my breath away. It broke my heart but put it back together again with a renewed hope in the staggering power of the human spirit. What Nujood did to save her life was a miracle; that she did it as a ten-year-old child is, quite simply, astounding.” — Carolyn Jessop, author of Escape and Triumph

“Nujood and all other girls like her who are traded like objects deserve to be heard. This important book gives them a voice and sheds light on an ugly secret that has destroyed the lives of children for centuries.” — Marina Nemat, author of Prisoner of Tehran

“Simple and straightforward in its telling, this is an informative and thoroughly engaging narrative” — Publishers Weekly