A Clean Breast  was a hard book for me to read, not just because my mother is currently focused on her own battle with stage 4 breast cancer, but because Theresa Tan gave us a blow-by-blow account of what happened including what went on physically, emotionally and mentally for her. 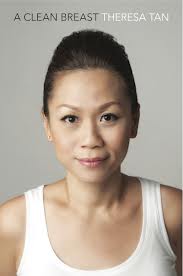 She also shared candidly how her condition impacted the people around her including her husband Kevin, children Bruce, Bethany and Becca and her best friend Karen Tan. In fact the book closes with three touching addenda: an essay from her husband Kevin, son Bruce and interview with daughter Bethany.

Theresa revealed that her mother died of breast cancer at the age of sixty-four after having gone through it three times – two mastectomies and a relapse where the same breast cancer cells attacked her lungs. It is understandable why Theresa opened the book with this information: that “Cancer” is one of her least favourite C-words alongside “cockroach”, “cockles”, “choke” and “calendula”.

Theresa has brains, beauty, brawn, and a good heart. She was a do-gooder well before her own brush with cancer. I first met Theresa when she was selling hot pink T-shirts to raise funds for women through her non-profit Women Made a Difference more than ten years ago.

Since Theresa works as a writer, editor and playwright, she recognises the power of a blog and began updating A Clean Breast Of It (http://acleanbreast.wordpress.com). Through her blog, she received emails and Facebook messages from friends and relatives whom she had not seen or heard from for a long time, but a source of her joy was hearing from other women who were going through cancer discovery, treatment or recovery and being able to support them in the ways she can.

This was also the medium in which she revealed she was denied an insurance payout after having spent tens of thousands of dollars on insurance, because her plans covered her for Stage One or stage Two and above only, not DCIS (Ductal Carcinoma In Sit). This led to a media expose and market demand of early critical illness plans.

Since Theresa is a writer, this is a book that is already a good read and I believe will stand the test of time and continue to give a voice for women who also have breast cancer, allow them and their families (as this book has done for me) to be able to better understand breast cancer, as well as find some kind of reconciliation and peace within themselves.

In 2012, she was a joint-winner of the Singapore Woman Award, presented by MediaCorp, in recognition of her work in educating women about breast cancer. Theresa Tan currrently runs boutique writing outfit, WORD Agency, which she co-founded.