Sex and the King of Fruits 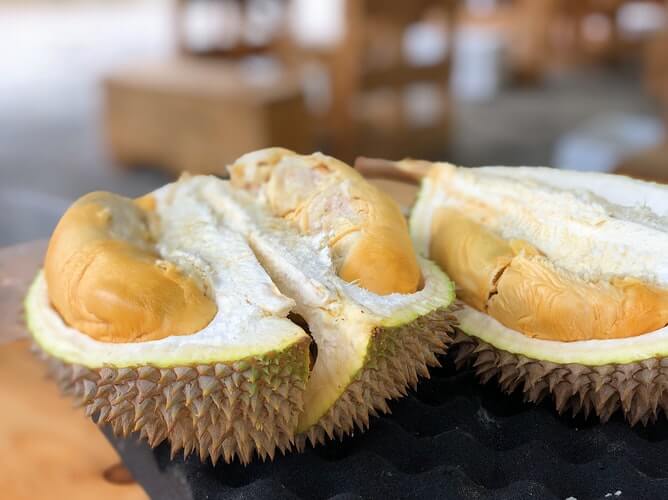 What is the relationship between sex and durians? Is there any at all?

Since I am paid for my time, I like to use metaphors and analogies to make sure that I get my intended message across in the most effective way in the shortest amount of time. This has a lot to do with my first career in corporate communications: where time is of the essence and clear, simple messages often work best.

When I hear of adverse reactions to male ejaculatory fluid, also known as semen, I ask follow-up questions to better understand the aversion.

Sometimes I find a discrepancy. There might be an assumption that because the semen looks ‘disgusting’ to the person concerned, it will smell or taste bad. Or the fluid smells bad and so the taste should be equally horrible.

I never try to disregard or dismiss their feelings. Instead I use the analogy of a durian.

Widely known and revered in Southeast Asia as the ‘King of fruits’, the durian is distinctive for its large size, unique odour, and formidable thorn-covered husk. The fruit can grow as large as 30 centimetres (12 in) long and 15 centimetres (6 in) in diameter, and it typically weighs one to three kilograms (2 to 7 lb). Its shape ranges from oblong to round, the colour of its husk green to brown, and its flesh pale yellow to red, depending on the species.

Mention ‘durian’ and you evoke immediate and quite diverse reactions – from deep appreciation to intense disgust. The edible flesh emits a distinctive odour, strong and penetrating even when the husk is intact. Some people regard the durian as fragrant; others find the aroma overpowering and offensive. The odour has led to the fruit’s banishment from certain hotels and most public transportation in Southeast Asia.

The smarter ones get it immediately the moment I say, “Think of the durian.”

The moment of ‘A-ha’ comes over their faces. A shift in perception takes place.

Granted, they might find the smell and taste appalling, but at the very least they would know it for themselves. And through repeated exposure, the perceived ‘offence’ might reduce and result in greater comfort with sexual expression.

Dr. Martha Lee is Founder and Clinical Sexologist of Eros Coaching. She is a certified sexologist with a Doctorate in Human Sexuality. She provides sexuality and relationship coaching for individuals and couples, conducts sexual education workshops and speaks at public events. For more, visit www.eroscoaching.com or email drmarthalee@eroscoaching.com.