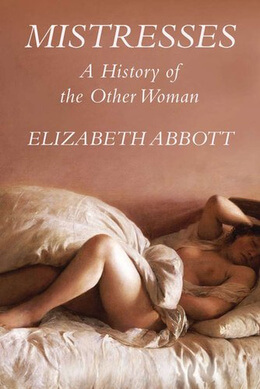 I have just finished this fascinating book, Mistresses: A History of the Other Woman by Elizabeth Abbott. First published in 2003, this book provides carefully researched and well-thought through accounts of the other woman through history. There are thirteen chapters excluding the introduction and conclusion by the author. Abbott was mindful to remind us that two mistresses she is acquainted with and mentioned in her book had their names and their partners changed and had used aliases instead.

Of the mistresses mentioned in this book, personalities we might be familiar with include:

Least you think the book is about celebrity mistresses, there are entire chapters devoted to eastern concubines, clandestine consorts of clerics, conquerors and their mistresses, mistress of men above the law (think mobsters) and even mistresses who were not even alive (fallen women in literature). Abbott explains that concubinage is in many respects a precursor to mistressdom, developed as an offshoot fo marriage and of the almost universal tolerance of male infidelity. The “other women” were flaunted as symbols of pretige and wealth and sometimes used to provide heirs he could legitimize.

This book was an eye-opener for me because I live in a time where “feminism and egalitarianism, the sexual revolution and the Pill, and changing mores and standards, notably the elevation of romantic love to an ideal, have stamped marriage” irrevocable (in the author’s words). We tend to judge mistresses and cannot comprehend why there are women who choose mistressdom over marriage. These are women who make choices out of passion, economic self-sufficiency or personal autonomy. Mistressdom still prevails and the first step to understanding more (and the different facets of life), to judge not (or judge less), is to perhaps to read this book. If this is not appealing to you i.e. learning to become a better person, this is still a page-turner for the stories of women from long ago – who have lived, loved and dared. It will certainly transport you to a differnt era where you will imagine and wonder what it was like.

You can find the book here.

‘It is not just mistresses, it seems, who need to wake up to the new millennium; one of the surprises of this engrossing book is how mired in myth and fantasy it reveals our attitude to mistresses as being.’ Sunday Telegraph

‘a fascinating account of the other woman through history, more sobering than titillating.’ Sunday Times

She has been called the “kept woman,” the “fancy woman,” and the “other woman.” She exists as both a fictional character and as a flesh-and-blood human being. But who is she, really? Why do women become mistresses, and what is it like to have a private life that is usually also a secret life? Is a mistress merely a wife-in-waiting, or is she the ver y definition of the emancipated, independent female? Elizabeth Abbott intelligently examines the motives and morals of some of history’s most infamous and fascinating women, from antiquity to today. Drawing intimate portraits of those who have–by chance, coercion, or choice–assumed this complex role, Mistresses offers a rich blend of personal biography and cultural insight.

She has been known as the ‘kept woman’, the ‘fancy woman’ and the ‘other woman’. She is both a fictional character and flesh-and-blood human being. But who is she, really? What do Madame de Pompadour, Heloise, Marilyn Monroe, Jane Eyre and Camilla Parker-Bowles have in common? Why do women become mistresses, and what is it like to have a private life that is usually also a secret life? Is a mistress merely a wife-in-waiting, or is she the very definition of the modern emancipated, independent female?

In Mistresses Elizabeth Abbott intelligently probes the motives and morals of some of history’s most infamous and fascinating women. Drawing intimate portraits of those who have – either by chance, coercion or choice – assumed this complex role, from Chinese concubines and European royal mistresses to mobster molls and trophy dolls, Mistresses offers a rich blend of history, personality and cultural study.