Life is stressful. How about some stand-up comedy from the comfort of your home? These are some Netflix Comedy shows I’ve watched over the past few weeks that I’d let to recommend you. 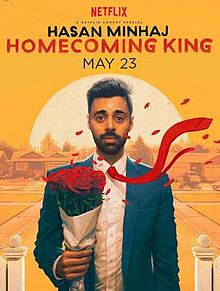 Illustrated with old photos and peppered with Hindi and Urdu phrases, Homecoming King features a central theme of the immigrant experience in the United States, based on true stories from Minhaj’s life as the California-born son of Indian Muslim parents. He discusses his childhood growing up in mostly white Davis, California, where he lived alone with his dad for eight years while his mother was finishing medical school in India.

He talks about the pressures of being the child of demanding immigrant parents while at the same time experiencing racism, bullying and rejection from the outside world. Stories include his mother returning to California with a younger sister he didn’t know existed, his heartbreaking senior prom night (when he arrived at his date’s house only to discover her parents had found her a white boy to take because of “how it would look”), and disapproval from his parents that he was engaged to a Hindu woman.

“Someone once said that satire occurs when one faces an absurdly unjust scenario that can’t be changed but only laughed at. For those who find Homecoming King boring, the white suburbia must’ve been a perfectly normal place to be themselves. So congrats for not being able to enjoy the show.” – IMDb.com. For more, click here.

“Minhaj offers a very benign comedy that’s intended to pull on your heartstrings more than it’s meant to shock…In an era of snark, Minhaj’s a very nice, eager-to-please guy… Minjah is totally spontaneous, even though he’s been working on this show in for two years.” – Show-Score.com. For more, click here. 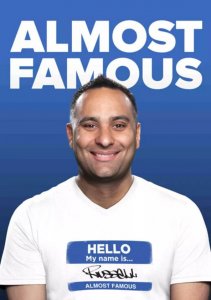 Peters’ sets have long relied on accents and observations about ethnicities. In Almost Famous, he breaks out of his routine; he says he knew his set had to evolve. Peters takes on more domestic issues like spoiling his young daughter with expensive furniture and the difficulty of executing a stealth pee in the middle of the night. His ability to play off his audience is still strong—something he says he got from his dad, who’s a frequent subject of his set: “Because he would listen to you and then just tear you apart. He was a counter-puncher,” Peters tells the Daily Dot. Peters, who’s been doing standup for 27 years, got some inspiration in another place when he was just 22 years old and starting out: George Carlin told me, ‘Get onstage as much as possible,’” he says. “If you’re at a bar and the band is taking a break, ask if you could do five minutes.”

In one Almost Famous segment, Peters jokes, “Everything’s race-based, and that’s fine for me because I’ve made a living off it.”

His tours make a lot of money, too, but that’s not what drives the business. Some people start out and they want to make all this money,” he says. “I never thought that I was going to make any money off of comedy. I just did it because I loved doing it. Don’t do comedy for money. Do comedy because you have to do comedy. I always say, I have to do it.”

“Remember the genuine laughs you had when watching a Russel peters special for the first time? You won’t have them again.” – IMDb.com. For more, click here. 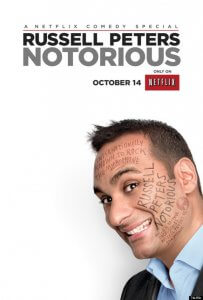 When stand-up comedians tour Perth, most perform at the 900-seat Astor Theatre, while the big international comedians pack out the 1700-seat Perth Concert Hall.

Not Russell Peters. The Anglo-Indian comedian almost sold out the 15,500-seat Perth Arena to kick off the Australian leg of his Notorious world tour. And while he may not be a mainstream household name like Chris Rock or Adam Sandler, the diverse demographics in the crowd proved that Peters has a colossal cult following. In fact, the 41-year-old himself poked fun at the sheer number of minorities who relished his riotous, race-based 85-minute set, picking out – and playfully picking on – people from Africa, Asia, Italy, Lebanon, Burma, Jordan and yes, even Australia, who spilled from the Arena’s cavernous bowl on to its main floor.

“What’s with those caterpillar eyebrows, man,” Peters joked of a young man’s thick black monobrow as a cameraman beamed a close-up to the two large on-stage screens. “That’s gonna hatch into a butterfly one day!”
Fernando from Italy came in for some extra embarrassment. “Why do you have a tattoo of a dragon down your arm, Fernando? Isn’t a dragon more of an Asian thing? Why not a tattoo of linguini draped down your arm?”

Indeed, this spontaneous ad-libbing with the crowd delivered even more laughs than Peters’ rehearsed material, proving that the Canadian comedian (of Anglo-Indian descent) is perhaps even better on his feet than in his polished routine. Often sounding uncannily like Seth Rogen, the new father also showed a real talent for multiracial voices and mannerisms, which doubled the laughs when he delivered gags as an Indian, Arab, Chinese, American, Australian and beyond.

4. Russell Peters vs  The World 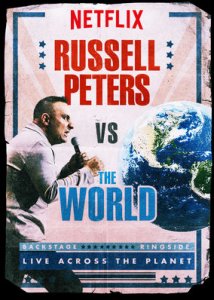 Comedian Russell Peters is set to star in a new stand-up and documentary series on Netflix, scheduled for October 14th. Filmed earlier this year, Russell Peters vs. the World follows the Canadian funnyman over the course of his global “Notorious” tour.

Peters, 42, who began performing in 1989, has since gained notoriety for descriptions of his Anglo-Indian family. Many of his bits touch on ethnic, racial, class and cultural stereotypes.

Will Netflix Become the Next Big Hollywood Studio?

Peters says that the Netflix series is a step in the right direction for his ambitions. “I’ve always prided myself on being outside the box and slightly ahead of the curve, which is why Netflix is the perfect fit for me,” says the stand-up. “Plus, the web took my career to a whole other level – we both owe a lot to the Internet.”

“Funky vibes on the floor” – The Star Online, TheStar.com.my. For more, click here. 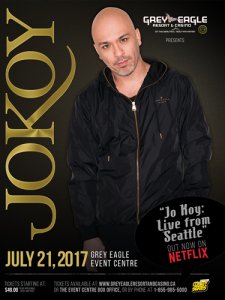 For his third stand-up special, first in five years and first for Netflix, Jo Koy went back to where it all began for him.

The son of a white Air Force father and a Filipino mother grew up near McChord Air Force Base in Tacoma, Koy didn’t start his comedy career until he and his mother had move to Las Vegas, but he has come home, so to speak, for Netflix’s Jo Koy: Live from Seattle.

Koy’s comedy heritage is as mixed as his genetic one. In his earlier years, bursting onto the scene through Jay Leno’s Tonight Show and Chelsea Handler’s Chelsea Lately, he gave off the physical vibes of a Dane Cook with the elaborate fascination and disgust with his son as Louis CK had with his daughters. A ripe cocktail ready-made for Hollywood to drink up in 2009.

Several years later, Koy is a regular fixture for listeners of Adam Carolla’s podcast, but for Netflix viewers, this hour represents their first chance taken on him. He’ll tell you straight up he’s the kind of performer who wants to make a woman laugh so hard, she’ll not only threaten to pee her pants, but then proceed to do so.

“Jo Koy‘s newest stand-up special finds him, like other comedians who have been around for a while but not on Netflix yet, devoting the hour as much to reintroducing himself to the audience as he is delving into new developments in his life.” – Sean McCarthy, TheComicsComic.com. For more, click here.

“I think audiences are more diverse than ever and they’re hungry for comedy that reflects who they are and their experiences.” – NBCNews. For more, click here. 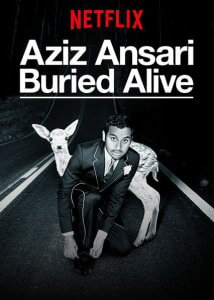 Topics during the set include Ansari’s views on the institution of marriage, parenting and love. The set has the theme of a wedding, with Ansari wearing a formal suit with a white boutonnière. Ansari said Buried Alive was much different than his first two specials, Intimate Moments for a Sensual Evening (2010) and Dangerously Delicious (2012).

“This special is much, much different than my previous two,” said Ansari. “As I hit 30, my material got very personal as I grappled with the gravity of the adult world—love, marriage, babies, and more. Do I really have to deal with all that now? Are my ding dong friends really getting married and having their own children? I couldn’t imagine having a kid right now. After I type this sentence, I’m gonna drink an apple juice and watch Jurassic Park—if that’s a guy that’s supposed to be ready to be a father, I’m very concerned. That’s what Buried Alive is about.” 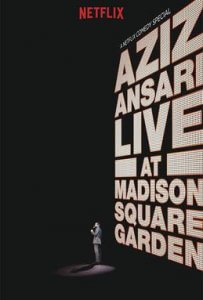 Aziz Ansari discusses topics such as immigration, being the child of immigrants, factory farming, misogyny, dating and romance in the 2010s, how technology makes meaningful connections difficult, and over-reliance on the Internet to help make trivial decisions.

In order to make the stadium show interesting for the audience, he was inspired by music tours, such as the Watch the Throne tour, and he recruited people who had worked on that production. Ansari was originally going to shoot the special in Toronto, but Rock convinced him to do so at Madison Square Garden, which Rock felt was more appropriate.

What do you think of this list? Let me know if you have any other favourite shows!