This is how I Started Asserting Myself 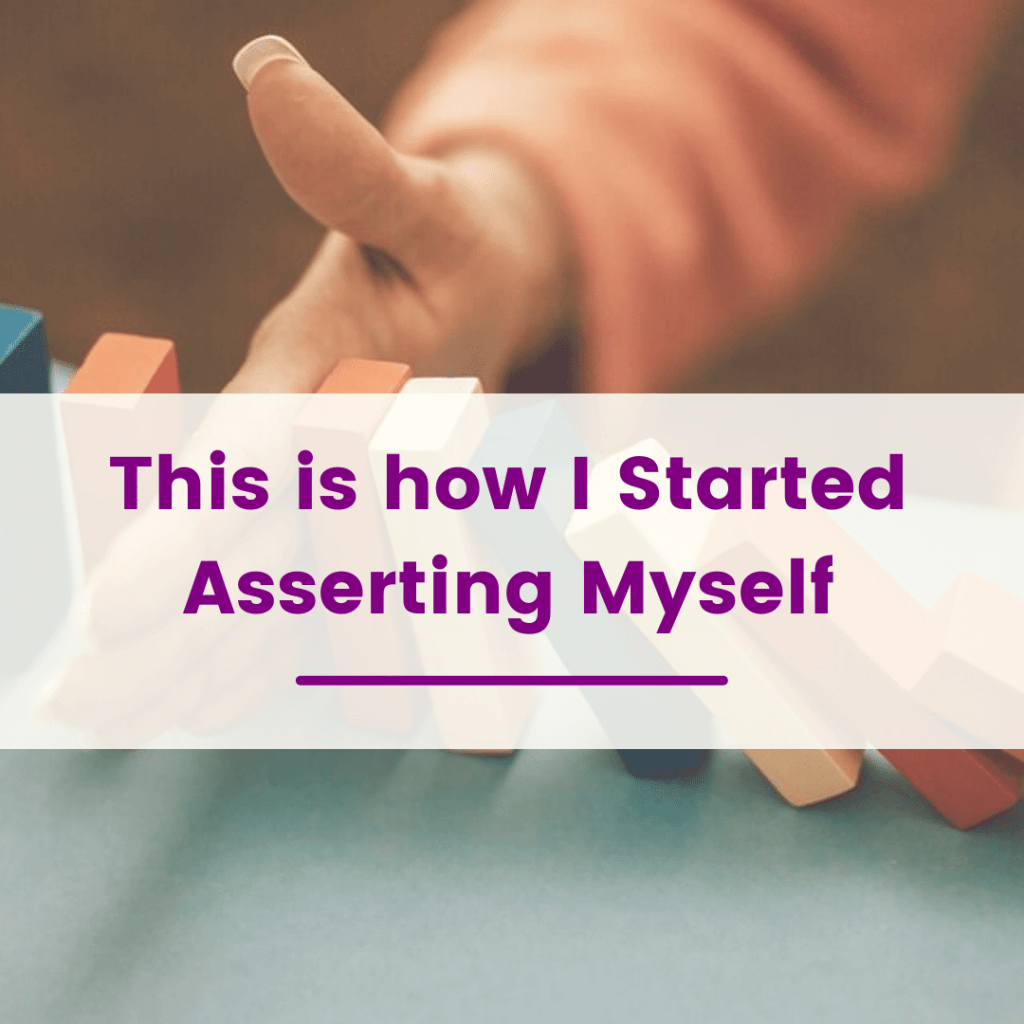 Years ago, I was attending a free-form movement class regularly and got to know a person whom I knew was a popular NLP coach in Singapore. Whenever we spoke, he would make it a point to reach out and touch me somewhere along my shoulder to arm without warning and definitely without asking.

I knew why he was doing it – it’s a well-known fact that people you touch are more likely to like you, but it didn’t make me like him more. Knowing the why didn’t help. All these touches made all too aware of him, even wary of him, and resentful of the non-consensual touch. It made me feel targeted, scared, helpless, angry and a whole range of emotions – just from the repeated unwanted light touches of my shoulder or arm (once every time I interacted with him).

I thought of stopping attending the classes altogether so I didn’t need to deal with him, then thought about how ridiculous that was. I avoided him as much as possible, but he would approach me and no matter whether it was interacting individually or within a group, he didn’t stop.

After the fourth or fifth time of this shit, I decided enough was enough. He was being inappropriate and probably didn’t even know it – being the entitled person he was. It was distressing me and I felt violated as stupid or trivia as it might seem to you.

As part of my own vow to take care of myself and practice assertiveness, I asked myself what resolution I needed. I was still finding my voice then and couldn’t go through with telling him this to his face. So I decided to message him on Facebook and let that be the closure I needed for myself regardless of the outcome – as in practice speaking for myself with somebody who is of low consequence in my personal life.

I messaged him something along the lines of: “I just wanted to let you know that I do know why you always reach out and touch me in the shoulder when we talk, but I’m going to ask to stop touching me now or ever. I do not like being touched without permission and this has happened several times now.”

No “sorry”, no “but”, no oversharing. Just the facts and my request. I can’t remember his reply, probably something around ok. But yes, he avoided me from then on in class and I told myself I didn’t care. I needed to take care of me first. I petted myself on my back and told myself to be proud of this personal breakthrough. And that if he doesn’t get any learning, that’s not my responsibility.

Over time, not immediately, I learned to speak up and assert myself. By reclaiming my voice, I now can have uncomfortable face-to-face conversations when previously I couldn’t. I made a personal vow to never say anything about anyone without being first willing to bring it up with them directly. I want to hold myself to higher standards of communication and being because I cannot teach what I don’t practice myself.

Speaking up, asserting ourselves, and discussing sensitive or difficult topics isn’t easy and especially so for us Asians when we’ve been told to be quiet, just obey, and be good most of our lives There came a point being liked was less important than liking who I was.

Each of us can be better communicators at work and in our personal lives. It’s like a muscle – it does get easier and your abilities get stronger with constant practice and training.

Baby steps. You can do it. Be the rockstar of your life.

You can seek relationship and sexuality counseling/ coaching with me here.