Read This Before You ‘Quiet Quit’ your Relationship 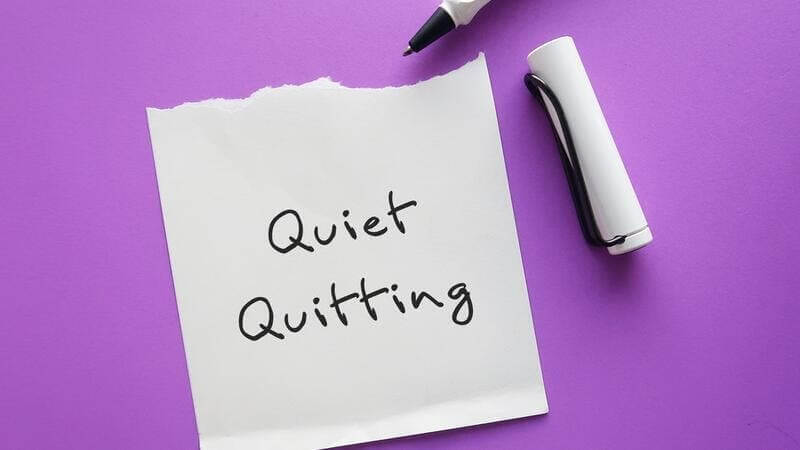 Much has been said about the ‘Great Resignation’, and in more recent months, the term, “quiet quitting.” Usually assigned to employees and their jobs, the term is rarely used to describe any other aspect of life – until now.

Expert Relationship Counselor and Clinical Sexologist Dr. Martha Tara Lee, however, argues that “quiet-quitting” isn’t anything new – at least when it comes to wreaking havoc on your relationships.

“Driven by the same underlying factors as real resignations, quiet quitting is usually a boundary-setting tactic for those in employment – opting out of tasks beyond their assigned duties, becoming less mentally invested in work, and only fulfilling the bare minimum responsibilities,” says Dr Martha.

“Essentially, they’re putting themselves first. They’re less willing to engage in non-mandatory meetings, they no longer stay late, or show up early. Although this is usually considered a somewhat healthy tactic when it comes to work and employment, when we see it happen naturally in relationships, it’s usually a warning sign for worse things to come.”

Dr Martha Tara Lee has been a Relationship Counselor & Clinical Sexologist in practice for over a decade, and has dedicated her life to individuals and couples through counselling. An advocate for positive sexuality, she remains dedicated to working with people to lead self-actualised and pleasure-filled lives, and founded her company Eros Coaching Pte Ltd in Singapore, to help others achieve relationship goals with effective support, information, and guidance.

Although the ‘quiet-quitting’ trend within the workplace feels somewhat new, Martha says it’s an all too common issue with the couples and individuals she often works with.

“There are couples and individuals who often, either knowingly or unknowingly, quietly quit their relationships as a boundary-setting tactic,” says Dr Martha.

“Whereas setting strong boundaries within the occupational realm, is often seen as a healthy way to protect their identity being tied to a job role, or a career, this kind of self-protective approach in relationships is toxic. Keeping your identity away from your partner, will actually provide you with less satisfaction in your relationship – not to mention the loss of trust from your partner.”

“It must be said that quietly-quitting is not ghosting. Ghosting is to vanish from your partner or dating prospect’s life completely – ignoring their texts, calls, and potentially even blocking them from any contact whatsoever. When someone quiet-quits a relationship, they’re sticking around – but with limits. It is a slow, but progressive disengagement that, if not solved or resolved, will slowly but surely completely erode the emotional tie that bounds your relationship together. This type of romantic disengagement is a surefire way of ending a relationship, or at least predicting relationship dissatisfaction.”

“Many couples I work with, especially Asian couples, are still in their relationship, but have essentially ‘checked out’ mentally. They’ve quietly quit their relationship, essentially. Sadly, this is a very common tactic used in relationship in marriages – particularly with Asian couples. Asian divorce rates are not particularly high compared to other parts of the world, but this doesn’t always mean that all couples are ‘happier’. It could mean that they’re staying in their marriage when there’s an issue, and are quietly quitting, instead of solving problems head-on.”

So what are the signs of quiet-quitting a romantic relationship? Dr Martha says that when it comes to love, signs that a partner is quietly quitting a relationship reflects some common and key behaviours in relationship disengagement.

“If you’re worried about your partner or believe them to be quietly quitting, you should look out for some key signs. Alternatively, you may be doing them without even realising – putting your own relationship at risk.”

“It could be anything from a lack of physical and mental attention, including touch and awareness to their presence. They could be avoiding asking or answering questions, daydreaming, mentally being elsewhere, or just not wanting to deal with their partner whatsoever. If your partner is also wanting to spend as little time as possible with you, that’s a clear and obvious sign to look out for.”

“There are many other relationship scientists that have shown that partners stay together due to commitment restraints that perhaps tie them to a relationship. This is often very common in Asian couples, especially in recent months following the stress and struggles of the coronavirus pandemic. People have felt strain in every other area of their life, which in turn can impact their relationship – but they don’t want to quit it just yet. So, instead of exiting that relationship completely, they quietly quit, and hope it gets better. This essentially is emotional divorce, which is a key early step in the process of relationship breakdown.”

Dr Martha says that the type of coasting and passive-aggressive action that comes with quiet quitting, particularly in Asia where people are often more passive and don’t know how to assert themselves, will simply begin a downward spiral to complete disconnection.

“Essentially, when one person quiet quits, it’s likely that the other person in that relationship will slowly match their effort level. Instead of quit-quitting though, if you notice your partner is checking out or if you notice an issue – talk about it. Bring the topic up, because as difficult as it may feel in the beginning, it’s going to be less hurtful in the long run if you ignore it forever. A healthy relationship must be given time, attention and be a two-way street. It can’t run on one person’s actions forever.”

“If any of this feels remotely similar to something you’re going through, I strongly advise you seek marriage counselling or couples therapy. It can really be the best method to talk about everything that is happening between you both, particularly if there is often immediate defensiveness or barriers being lifted whenever you try to talk about the issues.”