Book Review: From Peak to Peak

From Peak to Peak tells the inspirational story of mountaineers Grant ‘Axe’ Rawlinson and Alan Silva’s incredible human-powered journey and on a shoestring budget of NZ$2,000 per person. It took the duo 22 days to reach the summit of Mt. Cook, the highest peak in New Zealand. 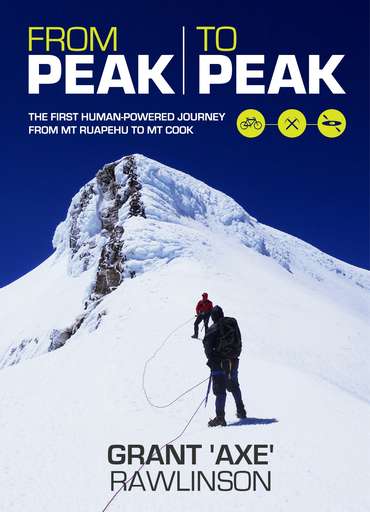 Rawlinson came up with the idea of climbing Mt. Ruapehu, which is the highest mountain in the north island of New Zealand, to Mt. Cook, the highest mountain in the southern island of New Zealand. He enlisted the more experienced climber Alan Silva to accompany him. They were to travel more than 1,400km with nothing more than a borrowed bicycle, some climbing gear, an inflatable kayak, and an incredibly slim chance of success.

Having met Rawlinson through Asia Professional Speakers Singapore, I wanted to read his book to support him, as well as understand more behind the humble and  likeable person that he is. This is an epic feat of endurance and this adventure story is a definite page-turner. It goes to demonstrate how a can-do attitude can triumph all odds. This is a story of mind over body and the obstacles that they came upon were overcame with more than just sheer determination. There was plenty of humour, luck as well as skill involved.

I was moved by the number of times in which Rawlinson mentioned his wife, Stephanie, and of how much he thought of and missed her. So much so Rawlinson regarded calling her before a big climb calmed him and was his good luck charm. For indeed, if things were to go wrong, as they can in a split second, wouldn’t we want to have done right by our loved ones? This was a good reminder to me.

At several points reading this book, I kept asking myself: Why are they doing this? Are they crazy? And why are they doing this to themselves? There was a love that shone through the book, not just the love Rawlinson had for his Stephanie, but one for adventure, nature, and living in the unknown. That much I can respect.

I also learned to respect how strong a positive attitude and mind set can take one. It was a balance between needing to be focused, so as to be in total control of what they were experiencing, hence being more open to whatever might come. I find myself being caught up with the story and actually finished reading it within one and a half days. This book is really very interesting story even for people who are not explorers and adventurers.

Out of curiosity, I read some of the book reviews on Amazon. Rawlinson’s friends had followed their journey and had little idea of the level of difficulties experienced. The book is peppered with interesting characters and incidents aplenty – there was the fat lady with the skinny husband, then there was the Maori woman, the rude backpacker’s manager. What amused me were also the incidences involving toilet visits. All in all, this was a very enjoyable book demonstrating how the human spirit can triumph all odds.

I recommend this book to anybody who is interested to – who have been to New Zealand, who are New Zealanders, who are adventurers, or who would just like to read what it was like to be somebody who can triumph odds through being passionate about what they do.

You can purchase the book on Amazon here.