I’ve read this book before, including Sherry Argov’s other book Why Men Love Bitches. I decided to re-read this book before giving it away – I’ve had to downsize my out-of-control library. This is, after all, a New York Times Bestseller and it doesn’t hurt to be reminded of some dating fundamentals being a sexologist. 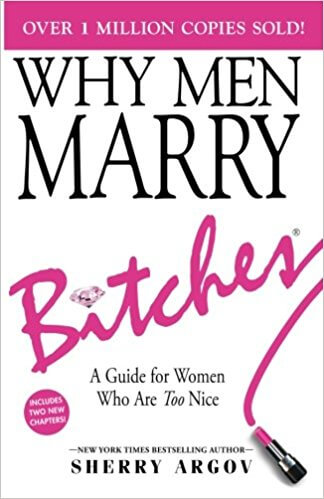 First published in 2006, Why Men Marry Bitches: A Woman’s Guide to Winning Her Man’s Heart contains 75 relationship principles over 7 chapters. For people who are raising their eyebrows at the book title, or feminists who are at the edge of declaring war because of the B-word, let me just say it is not a do-this-and-trick-him-into-marrying-you kind of book. Instead it is a sharp-witted manifesto on how to play big (meaning be the person you are always meant to be) and be his equal so as to win his respect, gain his heart, and have commitment (even if marriage is not what you want).

This guide shares real-life “no holds barred” interviews with men, as well as explains how being extra nice doesn’t necessarily mean he’ll be more devoted. Let’s paraphrase the last bit: “Good girls” who are sweet, patient and on their best behavior doesn’t gain commitment – they read boring.

Instead, according to principle 1, there’s nothing more attractive to a man than a woman who has dignity and pride in who she is. There’s also principle 40 which reminds us that when we are easily manipulated, he will assume he doesn’t have to give as much in the way of a commitment in order to keep you there. Here’s another if you don’t get it: He doesn’t want to marry a helpless little girl whom he will have to take care of (principle 55).

End of the day, the book is about assertiveness, not aggressiveness – and about understanding yourself, and being clear about your boundaries, as well as relationship intentions, and not compromising your values. I recommend this book to those who find dating challenging and are curious about how to make him chase you until you catch him as the book promises.