How Race and being LGBTQ+ Intersect in Singapore by Elijah Tay

This is a commissioned piece by Eros Coaching. It written by Elijah Tay alongside a friend who is in a minority race in Singapore and who chose not to to be named. 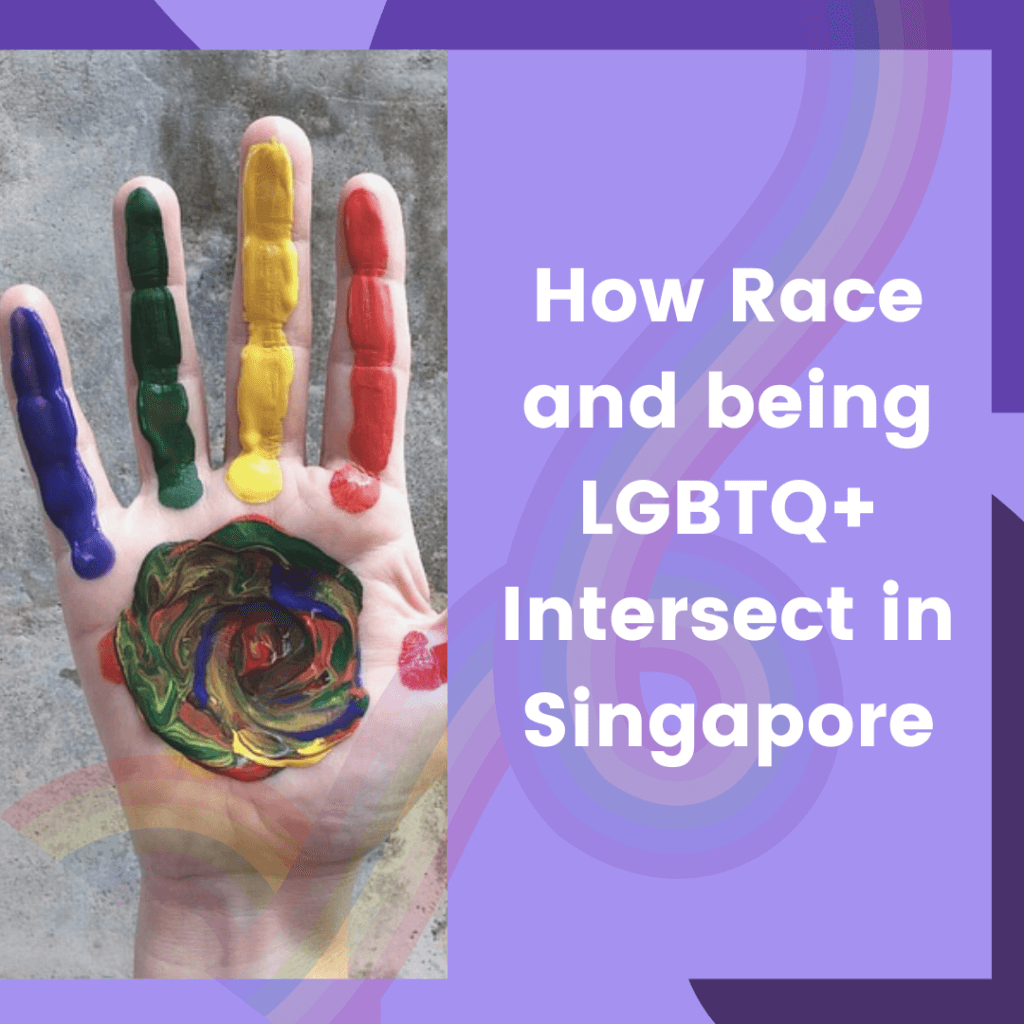 Intersectionality: “The inequalities produced by simultaneous and intertwined statuses and how that influences the life course of an individual or group”.

Racism refers to “any attitude, belief, or behaviour used to explain and justify prejudice and discrimination against racial or ethnic minorities, on the basis of perceived inferiority”. With Chinese people making up the majority (75.9%) of Singapore’s population, Malay and Indian people tend to bear the brunt of racism here, which manifests in the form of Chinese privilege.

Such racially-motivated aggression exists within the LGBTQ+ community tool. Platforms like @sgbrownqueers, @minorityvoices, and @wakeupsingapore have actively been shedding light on racial discrimination in Singapore. A brown queer person shared, “With my Chinese queer friends, I can’t seem to bond over our shared queerness, because it feels like there’s a certain model of Singaporean queerness that I don’t understand, that I can’t fit myself into.”. The Chinese majority in Singapore tends to dominate societal narratives – this includes defining what is perceived as mainstream and representative even within the local LGBTQ+ community.

In particular, existing literature reflect the prevalence of sexual racism amongst men loving men (MLM) on Grindr.Sexual racism refers to “a specific form of racial prejudice enacted in the context of sex or romance”. Indian MLM have shared about how Singapore’s “Chinese-oriented” gay community, like the larger Chinese-dominated Singapore society, has similarly placed them on the margins.

The racial hierarchy is reinforced through practices like racial verification – it is routine to ask matches about their race and express their prejudices in response. 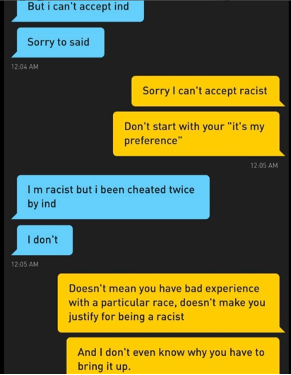 With this additional layer of discrimination faced by LGBTQ+ minorities, this begs the question: Who we are pushing the repeal of Section 377A for? Without questioning and tackling the racism that prevails even within the LGBTQ+ community, how can we truly preach the importance of liberation from societal and systemic shackles that oppress diverse forms of love?

Experiencing racism in multi-racial Singapore – a common experience for racial minorities, especially from a young age – has impacted several minorities, leading some to feel embarrassed about their own race and culture. Minorities who internalise racism are more likely to project their fear and self-hatred onto other minorities, as well as feel obligated to conform to the majority group in order to be accepted.

The oppressed often internalise the stereotypes of their oppressors:

Unfortunately, some minorities tone police and invalidate the experiences of other minorities by taking the role of their oppressors. Oftentimes, they may be oblivious to their own oppression since such conversations are not actively held. They choose to remain in denial about their oppression, rather than confront it. Internalised racism causes harm to others and themselves. It hinders them from embracing their own culture and makes them feel compelled to adhere to the majority’s ideals, culture, and standards. Having to deal with racism, on top of homophobia and transphobia, continues to be a struggle for queer minorities.

Colourism refers to the discrimination against dark-skinned bodies. Colourism is a major concern within the queer community. It is important for us to critically evaluate the way we perceive dark-skinned bodies – we need to unlearn the biases we hold of dark-skinned people, especially against Indian and Tamil bodies.

Several dark-skinned individuals have received unwarranted comments and descriptions about their skin tone, especially on dating apps, such as being referred to as “dark chocolate”, or being mocked for their facial features (e.g. noses and eyes). Why should dark-skinned Indian and Tamil bodies adhere to the queer majority’s desires and the beauty standard?

Dark-skinned queer people are often at the bottom of the list when it comes to the majority’s standards of desirability. Dark skin is either undesirable or hyper-sexualised, especially among MLM or masculine-presenting bodies. Someone pointed out on @sgbrownqueers: “Can’t dark skin be desired because it’s sweet?” 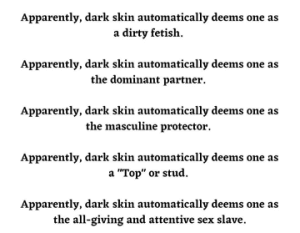 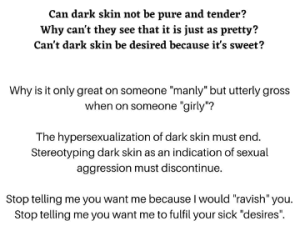 Colourism, unfortunately, occurs within minority communities – even within the same ethnic or racial groups. For example, some light-skinned Indians have and express a negative perception of dark-skinned Indians. Comments such as “don’t go under the sun” are common among Indian families towards darker-skinned family members. Skin whitening ads have also influenced the usage of skin lightening facial products and skin bleaching, despite its harmful effects. The perception of lighter skin being more desirable is instilled and internalised by darker-skinned individuals, driving them to turn to extreme measures in order to attain desirability.

Until and unless people and systems change, discrimination along the lines of race and queerness continues to disproportionately affect LGBTQ+ minorities. Chinese and cis-heterosexual people need to step up and be allies – to redistribute our privilege to uplift the oppressed, and dismantle the systems of oppression. Here is a non-exhaustive list of steps we can and should take:

This article was written in collaboration with an LGBTQ+ minority who wishes to remain anonymous.

Elijah Tay (they/them) is a passionate youth activist who has been involved in advocacy work since they were in secondary school. At the age of 16, they founded initiatives like @QueersOfLH and @MyQueerStorySG to uplift the voices of the LGBTQ+ community in school and in Singapore respectively. They have also shared extensively in live discussions and podcasts, such as on New Naratif’s Political Agenda, Sayoni’s webinars, SPEQ:TRUM podcast, Lesbeheard’s Instagram Live and Ferne Health’s online workshop. They believe in the importance of creating safe spaces while moving society towards becoming a safe space for all.