I attained a two-day Laughter Yoga Leader training last weekend. The brainchild of Dr. Madan Kataria, a Physician from Mumbai, India, launched the first Laughter Club at a Park on March 13, 1995, with merely a handful of persons. Today, it has become a worldwide phenomenon with more than 6000 Social Laughter Clubs in about 60 countries. 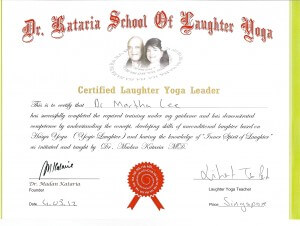 Laughter Yoga is so named because it combines Unconditional Laughter with Yogic Breathing (Pranayama). In it, we

The concept of Laughter Yoga is based on a scientific fact that the body cannot differentiate between fake and real laughter. One gets the same physiological and psychological benefits.

What is the relation with sex and laughter? Why would a sexologist get into laughter?

I decided to pursue this training after having had a good experience attending a Laughter Meditation session. The session was part of the morning warm-up exercise which took place at the Sexological Bodywork programme in Australia. My original intention was really to explore ways I could incorporate some of the techniques learned into my future workshops. I did not realise until later that perhaps going into Laughter Yoga had also to do with my desire to better process the emotions (usually sadness and frustration) of my clients which I pick up on. I also recognise that I do not laugh a lot, tend to take life a tad too seriously, and wanted more joy in my life.

Before the certification, I also took the opportunity to attend my first full-day Laughter Yoga. After six hours of full-on laughing (fake and real), I could feel laughter energy bubbling inside. I found myself feeling giggly over little things over the next two days, and attributed it to the after-effects of Laughter Yoga. I was right because the instructor manual also said that the effects of laughter yoga can last for a few days. I became a convert. This has led me to agreeing and wanting to run stand-alone Laughter Yoga sessions.

In many ways, sex and laughter are closely connected:

Attend a Laughter Yoga session if you can. Use laughter to get back in touch with joy, sensation and pleasure. Simple things work.

Dr. Martha Lee is Founder and Clinical Sexologist of Eros Coaching in Singapore. She is a certified sexologist with American College of Sexologists with a Doctorate in Human Sexuality from Institute for Advanced Study of Human Sexuality. She is available to provide sexuality and intimacy coaching for individuals and couples, conduct sexual education workshops and speak at public events in Asia. For more, visit www.eroscoaching.com.