When I saw on Facebook that Kitty Stryker was drumming up publicity for her new book Ask: Building Consent Culture, I was immediately curious to read it. Wanting to support what seemed like a worthy project, I also invited her to come on my weekly radio show Eros Evolution, and you can find the interview here. 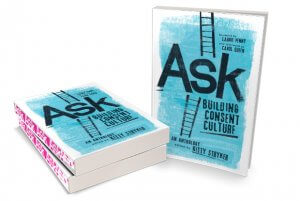 To prepare for the radio interview, I opened her book to realise that it was separated into seven well thought out sections: In the Bedroom; In the School; In the Jail; In the Workplace; In the Home; In the Hospital; and In the Community. Of course! Consent does not and should not be limited to the individual or the sexual. There’s dynamics of consent in all aspects of our lives, including within law, society, and governance.

In Stryker’s introduction, she explains her desire to curate something that took the consent in “safe, sane, and consensual” seriously, while also recognizing and unpacking how systems of power complicate what we can say yes and no to. Ask: Building Consent Culture is the result – an anthology with 24 pieces brushing on many areas of that nuance.

Feminist author Laurie Penny opens the anthology with a piece about why this book is important, touching on the political landscape in the United States and the various ways consent culture is struggling to take root. Penny writes, “The liberation of women, queers, femmes, and female-identi ed people is about more than negative liberty—it is about more than “freedom from.” It’s not just freedom from rape, freedom from abuse, freedom from fear. It is also “freedom to”—freedom to express desire, to explore pleasure, to seek intimacy and adventure. Perhaps what we should be asking of sexual liberation is not the mere absence of violence. Perhaps we should be going for something beyond “Let’s not rape each other.” What if we can do better?”

Ask: Building Consent Culture attempts to give a diverse group of people space to suggest what they think could be done better. None of the essays purport to have THE answer, but rather, AN answer.

Once I delved into the essays, I appreciated learning about the FRIES model coined by Planned Parenthood (standing for Freely given; Reversible; Informed; Enthusiastic, and Specific) as part of the essay, “The Political is Personal” by Porscha Coleman.

I was drawn in and touched by what transpired in a bystander-intervention model role-play in “Rehearsing Consent Culture” by Richard M. Wright, and the possibilities of development of skills towards consent culture. 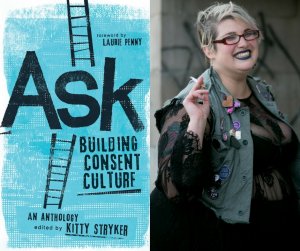 I cheered Shawn Taylor in “The Power of Men Teaching Men” in his personal journey of respecting the integrity of a woman’s body, and his emergence to holding other men accountable for their sexual violence.

I agreed with respecting “Bodily Autonomy for Kids” by Akilah S. Richard and her emotions that came up.

I teared up at Laura Kate’s “To Keep a Roof Over my Head, I Consented to Delaying my Transition”. By delaying her transition from male to female at puberty for a year, the irreversible changes to her body meant her current and future quality of life was affected.

There are indeed many voices, perspectives, and angles to dissecting rape culture, and to deciphering how to bridge that to consent culture. Stryker makes sure to cultivate a variety of voices in here, many of whom have not written on this topic publicly before. Her editing style leaves a lot of room for each contributor to speak from the heart and their own experience while also ensuring the pieces are accessible.

To round things off, Stryker wisely invited sex educator Carol Queen to write the Afterword. Queen honestly and vulnerably admits that while she has a thousand things to say about consent culture, there is still a lack of safe culture “when not being stopped is conflated with active consent”. She defines rape culture as “a culture that minimizes, ignores, or normalizes acts of sexual non-consent, does not adequately teach about consent, and does not seek to help people learn to pursue their desires in a consensual way.”

By this definition, we do have a rape culture to grapple with, yet each of us can do something towards building a consent culture. Reading this book is a start – with a list of resources in the back to encourage further exploration, may it also encourage action.

About the Editor: Kitty Stryker 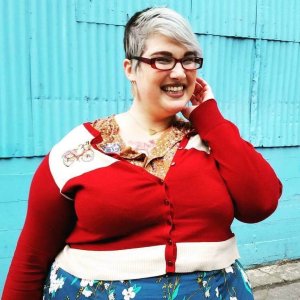 Kitty Stryker is a Degenderette, writer, queer activist, and authority on developing a consent culture in alternative communities. She was the founder of ConsentCulture.com, a website that ran for 4 years as a hub for LGBT/kinky/poly folks looking for a sex critical approach to relationships and which will be relaunched on 2017. Kitty also cofounded the artsy sexy party Kinky Salon London, as well as creating the award winning Ladies High Tea and Pornography Society, the SF based kink party Whippersnappers, and acts as head of cosplay for queer gaming convention GaymerX. Having finished “Ask: Building Consent Culture”, an anthology through Thorntree Press coming out in October, Kitty tours internationally speaking at universities and conferences about feminism, sex work, body positivity, queer politics, and more. She lives in Oakland, California with her wife, boyfriend, and two cats, Foucault and Nietzsche.