I purchased this book, Stitching A Revolution about six years ago because I was very inspired by the work of Cleve Jones. He spoke at my school, The Institute for Advanced Study of Human Sexuality, and showed us videos and gave accounts of what the AIDS Memorial Quilt was about. 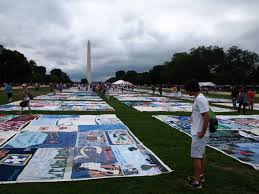 I hadn’t heard about the AIDS Memorial Quilt in United States at all because I’m Singaporean. As he began to share more of the story and showed us the videos and accounts, my classmates and I began to cry. I knew that this was a book that I had to read. Low and behold, years flew by as I got caught up with my work and there was always something more important, more urgent to do.

When I finally picked up this book recently, it was almost as if I continued where I left off with Jones. This book is written from his perspective as creator of the AIDS Memorial Quilt. He wrote about the story of the quilt in the context of his own political evolution, his activism for gay rights, the growth of the quilt, and later his personal struggle with AIDS.

I thought the book was only about the quilt. However, Jones also talked about the back story of how the quilt came about. He was working at the forefront of the gay rights movement in San Francisco during the 1970s, becoming involved in politics through gay San Francisco supervisor Harvey Milk. After Milk and San Francisco mayor, George Moscone were murdered in 1971, Jones organized annual candlelight marches in their memory. 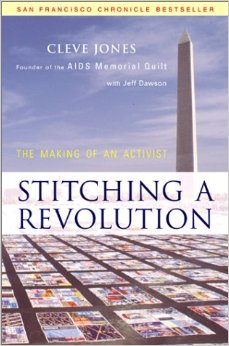 One of the events accumulated with marchers writing the names of the people who died of AIDS on cardboard placards, and this came to Jones as a form of epiphany that it should be in the form of a quilt made of panels memorializing individuals who had fallen victim to the AIDS epidemic.

One of the pivotal moments in the book was when Bill Clinton and Hilary Clinton visited the AIDS Memorial Quilt and they were the first presidents of the United States who did so. Since then, this movement has really been continuing and I can see from their Facebook page that the quilt is still very much alive and making its way around the U.S., raising awareness and publicity for the cause of HIV prevention.

I found the book revealing. Jones’ account may have been tempered by his ego and struggle to relinquish personal control of the quilt project. However he was first to admit his own failings and it’s very personal. What I liked most about the book were the anecdotes of the individual people who came from all walks of life and how they were brought together and transformed by the quilt. For instance, the quiet dignified mother from Appalachia who took the bus from San Francisco to deliver a panel for her son; the U.S. Marine and his wife from Texas who memorialized their sons’ friends. There were even people who sewed in ashes into the quilt.

These stories really hit an emotional nerve in me and I couldn’t help but start tearing at several of the stories. HIV is not something that only affects people who are gay. It affects people who love them and people who are not gay as well. The project helped to unify a whole nation and helped in the grieving process for many of the family members. I really recommend this book to people who would like to understand the historical evolution of the gay rights movement as well as better understand the importance of the continuation of HIV prevention.